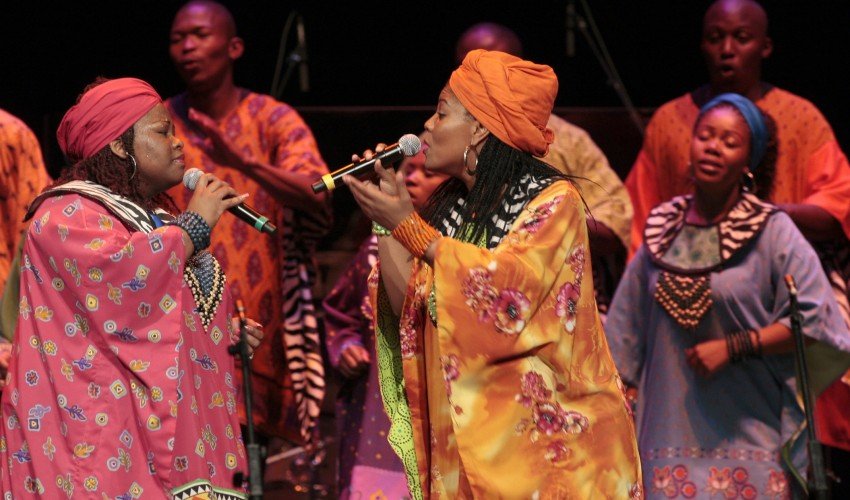 Gospel music is undergoing a renaissance in France, after a dip from the “golden era” of the 1990s. Alecia D. McKenzie reports.

Linda Lee Hopkins has seen every type of audience in France – those who believe in the message in her music, those who see gospel as an exotic art form and those who just want to enjoy the finger-snapping, foot-tapping beat. Sometimes, even a combination of all three.

“There are a lot of people who come to the shows who are not at all interested in religion,” Hopkins says. “I remember one lady saying she came to hear the music, not to hear preaching, but by the end of the show, she was transported. She didn’t speak English, but her heart was touched somehow. We see that often.”

These are the people who keep attending the concerts and bringing their friends, contributing to gospel’s resurgent popularity.  “When you give people joy and light, they will always come back to you and that’s what happens with gospel music,” Hopkins says.

An acclaimed African-American vocalist who has performed in stadiums and even directed a 100-voice choir for 10 years, Hopkins moved to France in 1991 and has given concerts around the country as well as in other European states, including Italy and Russia. She is part of the growing band of gospel performers on the continent.

“New groups are being created all the time, not only in France but in Germany and other countries. Sometimes the presence of American singers sparks the formation of these community choirs,” she told New African. “But nobody owns the music, it’s international.”

Ensembles and individuals that perform gospel music do represent different regions, but they come primarily from North America and sub-Saharan Africa.

Gospel Dream, a group whose posters can be seen plastered all over Paris, describes itself as a “multi-cultural, cosmopolitan choir of black singers and musicians”, and many of its members hail from African countries. Formed in 1990, the choir is among the most active of gospel groups in France, performing in churches and other venues. In mid-February, they drew several hundred fans to the historic American Cathedral in the upscale 8th arrondissement of Paris, with spectators applauding loudly after each song. Ticket prices ranged from 20 to 30 euros, proving that gospel is also good business.

Besides stadiums and houses of worship, the music is performed in a variety of other places as well. One popular venue in Paris is a restaurant and piano bar where Hopkins and other singers give weekly shows on “American Gospel Night”. In addition, landmark venues such as the Châtelet Theatre have hosted groups including the Soweto Gospel Choir, which performed there in 2009.

Along the River Seine, in the Bercy neighbourhood of eastern Paris, an African-American entrepreneur even organised “gospel brunches” on a boat moored to the quay. Music lovers had to cross a metal gangplank to enter the vessel, where ensembles delivered an energetic beat on Sunday mornings while diners enjoyed their “soul-food” brunch.

“Gospel has never gone away but it was really popular in the 1990s and now it’s rising again,” says Ricki Stevenson, an African-American businesswoman who heads a venture called Black Paris Tours.

Stevenson has been based in Paris for 16 years, and she takes local and international tourists on excursions that teach them about aspects of black culture in the city. The stops include venues where gospel music is performed, and tour participants can get to watch certain concerts.

“Gospel is popular in France because the audience understands the emotion even if they might not understand all the words,” Stevenson has said. “The music … encapsulates all the joy, bitterness and sadness, and audiences can relate to that.”

Other observers see the popularity differently, however. For gospel-music fan Sybil de la Renaudiere, a Parisian of American and Caribbean background, the music feeds an appetite for whatever is considered exotic. Meanwhile, choir director Bonnie Woolley says that audiences sometimes do not make a distinction between gospel and traditional spirituals, tending to lump both styles together. Woolley, a white American, is director of VOICES Choeur International (VOICES International Choir), which she founded in 1989. The group comprises 40 singers of different nationalities who perform spirituals as well as popular music.

“When I started this choir, what happened was that concert organisers kept writing ‘gospel’ on our posters, and at the time they absolutely didn’t know the difference,” Woolley told New African. “We were even criticised for not doing it ‘right’ because people would say why aren’t you moving, dancing, wearing the robes. It took a good 10 to 15 years for people to stop wondering why we weren’t doing these things.

“And even when we had ‘spirituals’ written on the posters, people would come up and say ‘I saw a gospel group last week and it wasn’t anything like this’. And I would say, ‘well, that’s because that was gospel and we’re doing spirituals’,” she added.

The musical arrangement of some spirituals has been “jazzified in France”, leading to even more confusion, Woolley says. “Somebody will take a spiritual like Every Time I Feel the Spirit and they’ll make it a swinging thing with instruments and dancing and everything, and it becomes gospel in that sense. So there’s this grey area about what is gospel as a form.”

According to musicologists, black spiritual music can be traced to 17th-century Africa. From there, it was carried by the enslaved to the “New World” where it blended with Catholic and Protestant teachings to incorporate Christian imagery, as slaves were prevented from publicly practising their own religion. Traditional “negro spirituals” spoke of the “pain of those terrible times,” says Hopkins.

On mainland France, American spiritual music took root after the Second World War, with the presence of US soldiers. Performers of the genre began settling in Paris in the 1970s, spreading the “word” through their concerts. Some presented both traditional spirituals as well as more “modern” gospel, with the incorporation of jazz and blues elements. According to Hopkins, gospel received a boost with the success of “Sister Act”, a 1992 movie starring Whoopie Goldberg that portrayed the music as a force to bring people together. A number of American and African singers of gospel have now made the French capital their home, and they may actually sing gospel on some days and different genres on other days. Hopkins’ repertoire includes a range of music, and she recently participated in the French version of “The Voice” competition performing an R&B number, for instance.

Hopkins has said that the French appreciate anything that is à la mode (in fashion), and that includes gospel. “Ninety percent of the audience don’t understand the meaning of the song. But at some point the Holy Spirit takes over and touches the people, and they’ll come at the end of the concert and say something came over me, but they don’t want you to start talking about religion,” Hopkins says.

For her, personal belief plays an important part in the music. “I don’t believe in doing things just for the money, if my heart is not in it,” she says. “If you have faith in what you really want to do in life, it will work for you. You can do all things through the spirit that strengthens you.”

Sylvia Howard, a powerful-voiced jazz and blues singer who also performs gospel, has continued “working a lot” in France. But every now and then, individuals among the audience can be less welcoming than others, showing a lack of appreciation for the art form.

“Prejudice here is alive and well, but even with that, I have far better audiences than not,” Howard has said. “It depends on where you are in France. Most people are very appreciative, very generous and very open. I’ve lived in different countries, and you’ll always find prejudice somewhere.”

The African-American entrepreneur behind the “gospel-brunch boat”, a musician named Juju Child, said he believes that the tradition of the music in France deserves to be continued. “I come from a religious family, and I know that gospel is a powerful remedy for a lot of things,” he said.

The brunch actually reprised a much-loved custom that lasted for several years in the 1990s and early 2000s in Paris, when people would dress up in their Sunday best and head to a restaurant called Chesterfield for gospel with their pancakes or croissants. That place is now gone, but the music is a strong survivor. At concerts, one is often struck by the composition of the audience, which includes young and old, French and English-speaking people, black and white, male and female.

“Fans come from all walks of life and they’ll travel far to see a concert,” Hopkins says. “Many people are stuck on gospel music, just like I am.”